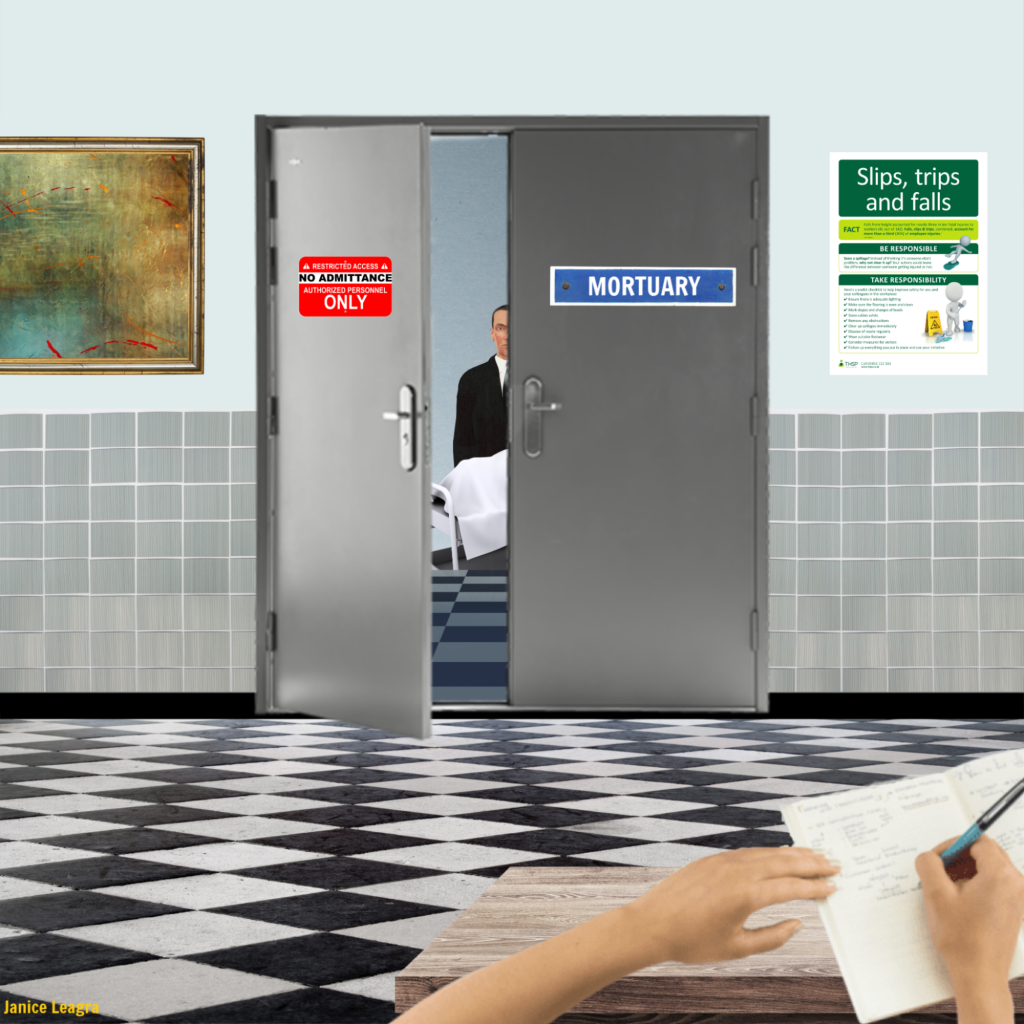 On the Monday, we ask people about him, what they remember. Most of them have something to say.

‘Was it something to do with his drinking?’ says a woman he worked with. Her mouth is slightly offset, perhaps by a stroke, but perhaps not. We write down gossipmonger in the new, fresh-smelling notebook. We also write weird mouth.

The blank page is sullied and we feel good.

Another woman from his office tells us she went past the building he lived in last week. His curtains, she says, were billowing in the breeze, sucking in and out of his wide-open window like the tongue of a monster. This is exactly what she says. We write down billowing, tongue, and monster. We also write down embarrassing poetry, but this last we cross out, embarrassed.

His boss cries. We pass him the handkerchief we carry for just such occasions; mostly we find people appreciate these small things at difficult times. His boss wipes his eyes, blows his nose, hands back the handkerchief.

‘You don’t see many of those about now,’ he says. On his desk is a photograph. In our notebook we write ugly wife, ugly kids, and why are you crying, fatso?

We talk to everyone.

A taxi driver with three fused vertebrae in his neck says he drove him home from a club with woman.

‘Hand up her skirt, right there where you’re sitting,’ he says, looking at us in the rear-view. We write SEX in capital letters. It looks good on a page all of its own. We also write can’t drive with a neck like that, and we write it again directly underneath, and again, and again,because it sounds like a song.We sing it for a day or so, the rhythm of it making us smile.

Two kids who live across from his building do a cute double-act where one of them uses sign language and the other translates. We write deaf kid in the notebook, but then the mother comes out and smacks them both across the head, and they run away, laughing.

‘Fucking coppers,’ she says, slamming the door, and we write this down too, underlined.

On the Friday, a body gets dredged from the river. Mid-thirties. Six-three. Caucasian. The twin brother from Scotland comes down on the train for the identification, and while we’re waiting in the corridor, we play a game in the notebook where we list all the other reactions we’ve seen.

Pissed herself, we write.

Tried to: a) attack the body b) steal the body c) engage in sexual contact with the body

And that’s when the twin comes out, having seen his own death reflected.

He doesn’t say anything, just nods, and we write down death, reflected adding the comma because the pause is everything, and then – seeing as it’s both an ending and a beginning – we draw a line across the page, like this: