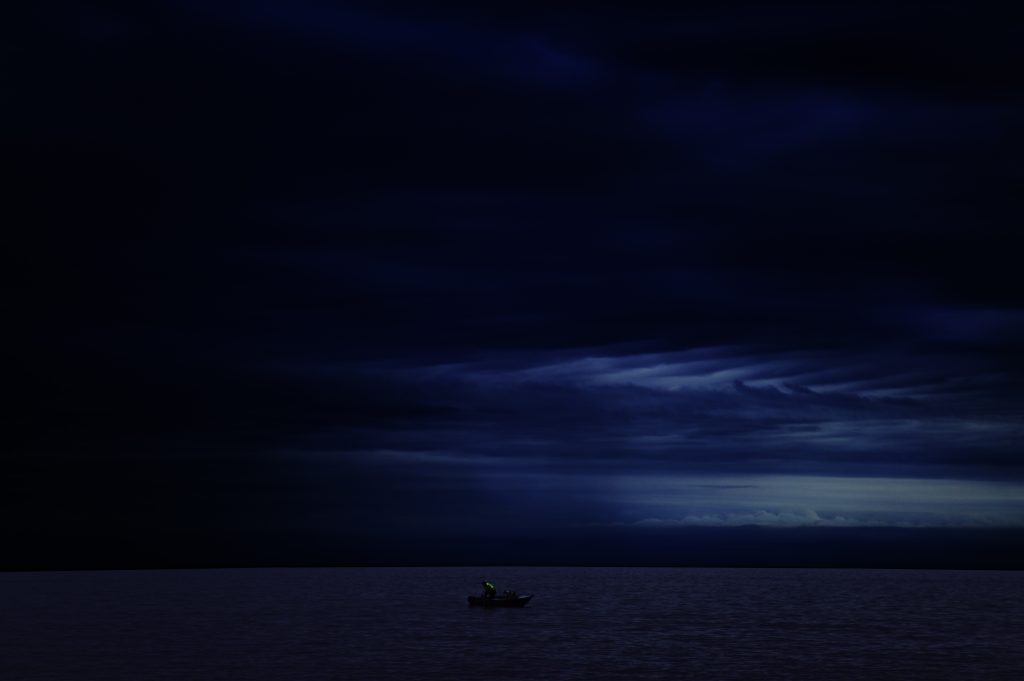 It passes the time, pondering their salvation and moulding everything by it. I bear witness every night: ripples rousing the bay, then the swollen crop of dead rising into this reality. Starch-brown foam stirred ashore, the ripples scalp the night open, letting me in. Then the twiggy boatman’s outline in the dark, hoisting the dead onto his tiny vessel. His tuneless humming – faint, as might be heard by tourists kept awake by the blather outside their room (or like the buried plagued by mourners trampling their graves above them) — annoys me now. I say nothing. Two at a time, his rusted bell rings out for each dead lump heaved aboard once he tends to their faces.

‘Do you get hungry?’ I called once, then felt stupid. I wonder if I’m annoying him, but those things shouldn’t bother me anymore. I always greet him, forced cough to announce myself, no response. I’m in an old sleepworn football jersey, picking at the rubber logos and standing tense in the night chill. I think about asking him where I can change, then think the better of it. I hate his unbothered approach to awkward silences.

I crane my neck. The drowned men’s garb spans centuries and remains largely intact, aged by water, scum-crusted and colour-drained to bleary slime, sealed to keep their dead skins, their flooded world, pawing them uselessly – the whole time the old boatman bent knotted spine working away, never content nor bitter. At least as far as I can tell.

Small revelations announce themselves in feeble ways, like the slow warbling song from a battery-sapped toy. In one such moment carved from infinity I edge close enough and angle myself just right to see and understand in the gloom and hush of the windless world – a curious mistake.

The bodies don’t move not even bobbing in the flood so heavy with sea and pickled rot, but the eyes shine full, unmoving but surely present. And the boatman gently pries and sets aside their diving bell helmets and whatever else to bare their eyes and close them, knowing the sight of something from here might stir too long in their ancient souls and set their dormant prayers to bursting. Then he moves on into sea fog beyond my vision, keeping quiet the dips and hums as he rows. And he’ll return unseen by me, his tiny vessel empty as before and do it all over, and I pick away at myself wondering how long it’ll feel like this time. I call out, ‘I think I’ve missed my birthday’, but he carries on not regarding me.