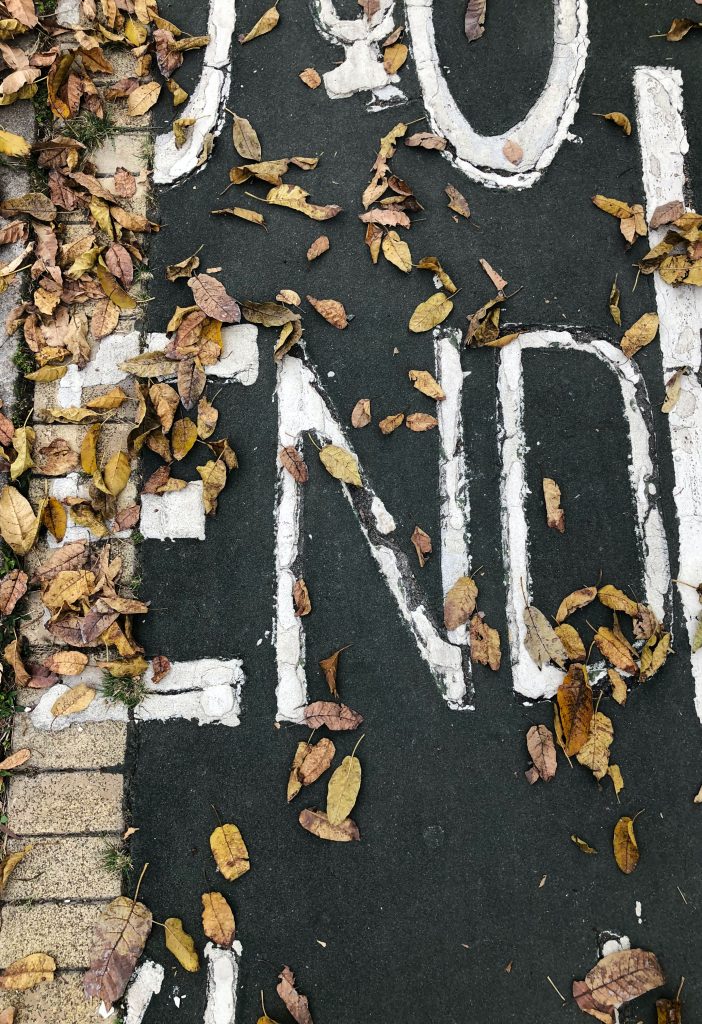 Leaves were compressed against the curb in small mounds, like discarded wet shoes in every shade of leather, though it wasn’t raining now. Sasha pulled down her hood to show me. I pushed it back on. Across the road, a streetlight came on then another. Sasha did a little dance each time, tugged at my arm for me to praise her.

‘We’re going to see Mummy’s friend,’ she said again, parroting what I’d told her on the way into the city.

‘Dominique’s not really my friend,’ I said, ‘just someone who is on the same course as me.’

‘Does she go to University, Mummy?’

‘Will I go to University?’

I looked at the cars making the most of Saturday, short-cutting through the narrow street. On weekdays, pedestrians can’t cross the road for students’ cars parked like the last tins on supermarket shelves.

‘Look, Mummy, I can see my breath.’ She chuffed.

I said, ‘You’re like the steam train we saw in the station when we arrived.’

She made pistons with her arms.

A car indicated. I took a step towards the edge but couldn’t make out who was driving.

Sasha said, ‘Look, Mummy, when I do this, I can smell my bum.’ She was touching her toes. I pulled her back from the curb as the car pulled in.

‘Don’t go near the edge, Sash. You don’t want to end up like these.’ I pointed to the leaves.

A man got out of the car. He had a bottle of wine in his hand and was holding a bunch of dahlias that appeared black. He seemed lost until another, younger man came out of one of the old houses converted to student flats opposite the University library and embraced him before ushering him inside, cutting off the glowing hall with a carefree slam of the door. The gloss gave the impression of melting ice.

‘Mummy, can we ride the steam train?’

‘Steam train? Like the olden days? I dunno. We don’t want to live in the olden days, do we? Here. Hold my hand to cross this road.’ She slipped her silky little fingers into the curve of my palm. I heard her feet sinking into the leaves then scuffing the tarmac.

I picked her up and shifted her onto my back. Her heels dug into my thighs, made bloody marks on my jeans with each sinking step.